I’ve recently been on site in Herculaneum and Pompeii doing some work. Whilst my research often leads me to new areas of the city or I am trying to find some particular detail about whatever I’m working on, it is rare, having first set foot in Pompeii more than twenty years ago, for me to really see it in a new way. This visit, however, was different.

Currently (and until January), there are thirty bronze sculptures created by Igor Mitoraj placed around the city. This exhibit, reportedly curated by the artist before his death two years ago, places statues in various locales around the city. Many are in obvious public places like the Forum or the Stabian Baths, but others are placed in such a way that they kind of surprise you as you find yourself on the floor of the theatre with them looming above from the wall of the Triangular Forum. The artist was heavily influenced by Classical art, as is obvious from his work. I admittedly knew little about his work until quite recently, but have since read of his fragmented and misplaced or broken bodies as depicting both how damaged ancient statues appear, and as the physical representation of human despair. There is, certainly, a sadness in the faces that appear.

There were four sculptures, two in the changing room of the Stabian Baths and two in the Triangular Forum, that I found particularly reminiscent of ancient art. The wrappings and postures of these works are evocative of various ancient bronzes of boxers. One that comes to mind most immediately is Boxer at Rest, a late Hellenistic statue found in Rome. 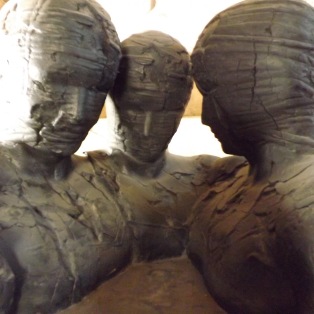 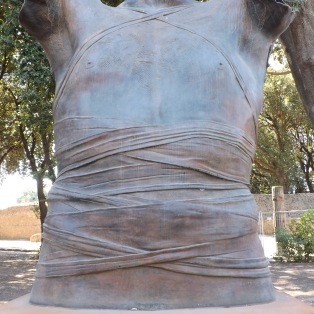 One piece I found quite interesting simply for its placement was at the junction of the Via dell’Abbondanza and the Via Stabiana. In antiquity, much like today, this crossroads was a hub of activity and foot traffic coming and going from the Forum, the theatre district, and the commercial area of the street leading to the amphitheatre and palaestra. It was here one of the most prominent men in Pompeii in the Augustan period built an arch, which was surrounded by statues, including one dedicated to himself, Marcus Holconius Rufus. As this was an area once filled with honourific statues, it was really quite something to see one (more or less) as it should be. The same could be said of an equestrian statue placed in the Forum, positioned on one of the remaining statue bases of antiquity.

I absolutely loved seeing Mitoraj’s work scattered across the city. Besides the fact that his work is incredibly beautiful in its own right, seeing these bronze sculptures against the backdrop of the Pompeian cityscape was quite extraordinary. For one thing, it is rare to see bronze in an ancient site like this – where bronze survived antiquity without being melted down, it is almost exclusively kept in museums. This, although modern art, provided a small glimpse into a missing element of the ancient city. Beyond that, it made me look at Pompeii in a completely different way than I have before. I don’t want to say I am blasé about the remains of the city – I do still feel the same awe as I did the first time I stepped into the Forum as a high school student – but there is a certain amount of complacency when one has worked in the same place year after year. This exhibit of sculptures made me look again at familiar places, in a way that made me appreciate the artistry not just of the art work, but of the buildings, the scenery, and the way they worked together, giving me an entirely new impression of a city I have been in love with for decades.