A number of months ago I had the chance to go to the V & A for the exhibit ‘Botticelli Reimagined.’ Whilst the exhibit as a whole was about more of the artist’s works than just Venus, both she and the similarly inspired by antiquity painting of Primavera were certainly a focal point of at least half of the collection on display. The artwork ran the gamut from Botticelli’s own paintings to modern works, fashion, dance, and performance art.

What struck me about this collection of artwork is the enduring legacy of the image of Venus. It occurred to me that whilst I have previously written about Venus in her guise as a goddess of love in the graffiti of Pompeii, and her special role as the patron deity of Pompeii known as Venus Pompeiana, I have paid much attention to the image of Venus that was so prevalent both in antiquity and in the modern world.

The number of images (whether painting, mosaic, or statue) are far too numerous for me to catalogue here. What I am intrigued by, however, is the most recognisable form of Venus, in which she is depicted with emerging from the sea, usually from a shell, at the moment of birth. This is the image that Botticelli used in his painting, and is one that can be traced back to the walls of Pompeii.

In the peristyle of the eponymously named House of Venus in the Shell (II.iii.3), this is the precursor to the famous  painting of the Italian renaissance. But it isn’t the only such image that survives antiquity. A second century AD mosaic from Zeugma in Turkey depicts Venus (here as the Greek Aphrodite) in her shell, surrounded by ikhthyokentauroi (consider them the fish version of centaurs) identified as Aphros (Sea Foam) and Bythos (Sea Depths), obvious references to her birth story.

A late third century AD wall painting from Rome, found in the lower levels of the Case Romane del Celio, also depicts Venus in her shell, surrounded by erotes in small boats. 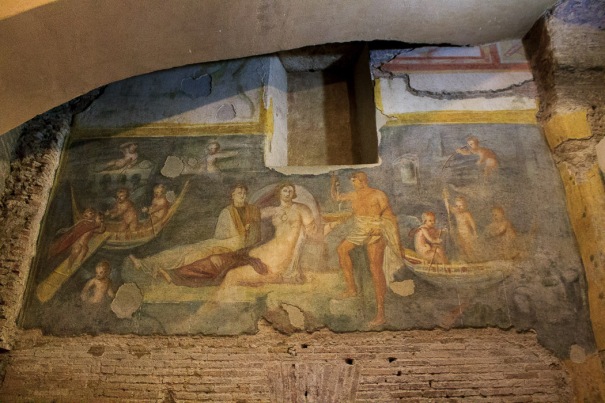 Of course Venus was not just depicted in painting, or by Romans, as is evidenced by this third century BC terracotta statue from Greece.

This image of Venus has endured for thousands of years, and Botticelli was not the only painter of the modern era that choose Venus as his subject. He will probably remain, however, the most famous. I have a number of theories as to why this version of Venus is so popular – her fantastical birth, the ability to depict her nudity as she wouldn’t be fully clothed in the sea – but one of the modern interpretations I saw at the V & A may hold the key to understanding this legacy of Venus.

Here, the shell has moved to the forefront, and is used to shield the viewer from the genitalia of Venus. Concha, the Latin for shellfish or mollusc, has been used as a slang or derogatory term for a woman’s vagina in numerous languages and cultures. I cannot help but wonder, if in this context, the shell depicted in the many images of Venus’s birth across the millennia hasn’t been a nod to her sexuality, her guise as the goddess of (physical) love, and in fact has little to so with her birth story per se. Perhaps this is why this version of Venus has so long been the obsession of artists.