Like anyone who has worked and studied in Pompeii for many years, every time there is a new story about the condition of the site, the mismanagement of resources, changes in personnel or further damage, I can’t help but feel frustrated, angry, and a little bit sad. As someone who has dedicated a large amount of my academic life to this city, it is incredibly difficult to witness this seemingly endless cycle of arguing, accusations and political in-fighting with little (noticeable) improvement to the actual circumstances on site. At the same time, I understand the difficulties of managing such a physically large site, balancing the needs of tourism and scholarship, and the difficult decisions that must be made in regards to allocating funds for preservation and restoration. I also fully recognize that much of the reporting in the press is exaggerated or sensationalized to the detriment of the leading figures in the Soprintindenza. The people in charge of Pompeii have an incredibly difficult task, and I don’t envy them in the least.

But this latest round of collapses, appearing yesterday afternoon in the press, have had a far greater impact on me than any previously.  I found myself holding my breath when I read a tomb was one of the damaged structures, waiting for the link to the article to open. When I saw the photo, my heart just sank. 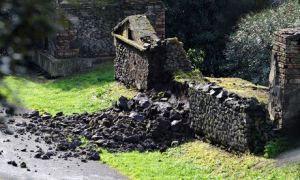 Understand this: my current project, and the one to which this blog is dedicated, is an examination of the networks in Pompeii, based on the epigraphy left by the city’s people. My interest in the people who once populated this city came via the funerary monuments they left behind. The tombs were the subject of my doctoral dissertation, and are the part of Pompeii I know best. I spent years amongst them (literally and in the library), measuring, photographing, documenting, fighting off bats in tomb chambers, sitting and observing, looking from every angle at how the ancients might have viewed them. Silly as it may seem, I feel rather proprietary towards them: these are MY tombs (yes, all one hundred and twentyish of them).

So when the photo of the collapse loaded on my screen, I knew exactly which tomb it was, the evidence for burial – just one small columella marking a grave was in situ behind the wall – and how it should look. Was it a large tomb with lots of decoration, or a long dedicatory inscription? Absolutely not.  It was a relatively simple burial enclosure, with a single opus incertum wall of tufa, with no known dedicant. In fact, if you were going to pick an insignificant tomb to collapse, this would be a prime candidate. There was nothing remarkable about it.

And yet, I would argue every tomb is remarkable. Or more to the point, that every structure in Pompeii, no matter how simplistic or seemingly insignificant, is of value and worth protecting. I have no idea what kind of maintenance, if any, has been performed in this area or to this tomb in recent years, but my guess would be little to none, because it was such a simple structure, with no feature that distinguished it in any way from an architectural, epigraphic, or art historical perspective. But that simple wall actually provided quite a lot of information: it provided a relative chronology for dating adjacent tombs on the northeast side of the Porta di Nocera necropolis; it was part of a sequence of structures that had a symbiotic relationship architecturally; and most importantly, it demonstrated that even those of modest means, unable to afford much more than a simple wall of locally sourced materials, had the desire to honour their dead.

For me, that sentiment is the crux of what compels me to keep working in Pompeii. Less than two thousand years ago, Vesuvius preserved the lives, deaths, loves, games, jokes, rivalries, jobs, and a myriad of trivial details of the every day for the roughly twelve thousand people who lived in Pompeii, as well as those who had come before them. As important as this evidence is for the study of antiquity as a whole, there has always been something more personal about Pompeii, some element that forges a connection between and us and them that is experienced by scholar and tourist alike. And that is why every new story lamenting the state of the ruins, and seeing this for myself with each new visit, is a little bit heartbreaking. But more importantly, it is also why the protection and preservation of the site is so vital, even for the single wall of a relatively simple tomb, housing the remains of one unknown individual.

3 thoughts on “This time, it’s personal”